Coolpad a smartphone manufacturer recently at an event in Dubai introduced Cool play 6 which comes with a massive Ram of 6GB and 4000mAh battery. The device runs on Android 7.1 Nougat out of the box which would be updated to Android Oreo 8.0 which is announced on 21st August 2017. Going by the specifications the phone is great for Gaming with Great Ram and battery capacity. As a topping on Cake the phone comes with a 5.5-inch Full HD display with 1080 x 1980 pixels screen resolution. The phone houses 64Gb of internal storage which is not expandable. The Cool play 6 has dual sim option which means you can Two sims at the same time. The phone is powered by 1.4GHz Octa-core Qualcomm Snapdragon 653 processor.  Currently, the phone is the most affordable phone with these specs in India. The high – performance and premium design smartphone is priced at Rs. 14,999 and comes with an innovative fingerprint sensor. The phone will be available exclusively on Amazon.in from 4th September 2017, in two color variants, Gold, and Black. 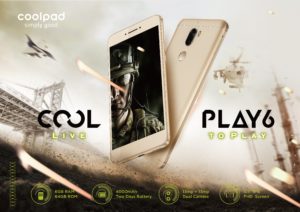 “India and U.S has now become two of the largest markets for Coolpad overseas. We have always believed in launching products that start a trend in the market and Cool 6 is yet another winner from Coolpad. The response we have got from our consumers over the years with every launch has been overwhelming and we are touched by the love of our Cool fans. We are confident that with R&D capabilities and quality products, we will be able to gain an even larger market share in India and other regions. Apart from that we are also coming with exclusive Coolpad services centers in India with plan to have these in at least 5 cities in next 6 months.”

“With the positive sentiment around Indian smartphone market, the country is preparing for the biggest growth. Today customers want world class products at competitive prices. In the last couple of years Coolpad has done well and we have beaten even our own estimates. Year 2017 has been a game changer for Coolpad in India and we continue to put our resources in the country with a plan to achieve 50% growth to extend our market share to 6% of the total market in India. We already have offline presence in 8 states with a reach in 3000 Multi-brand outlets and have plans to expand it to a total number of 18 states in next one year. It is only because of the quality of our products that today Coolpad smart phones have a 25% market share on Amazon in the sub Rs. 8000 category. With this launch we not only plan to lead the online space but also to make a bigger impact on the offline market in India.”

In a way, we feel the phone is an upgrade to the previously launched Coolpad Cool 1 (Review). The key highlights of Coolpad Cool Play 6 are the 6 GB RAM and 13 MP + 13 MP dual camera, which makes it an exceptional device. It runs on Android 7.1.1 and is powered by a 4000 mAh non-removable battery. Cool Play 6 will be another trend setting mid-budget device from Coolpad, with every feature to be a complete smartphone. Coolpad has also announced to provide the Android 8.0 OTA update by December 2017 for Cool Play 6.