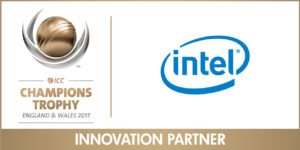 Cricket is one of the world’s largest sports played in over 100 countries across multiple formats. The game has transformed significantly in the last decade. Whether it’s the addition of T20 format, exciting rules like a free hit on a no-ball or using newer technologies for adjudication and bringing more transparency to the game, it has all been about enhancing the player performance, the fan experience and encouraging more people to play the game.

The International Cricket Council (ICC) has named Intel as its Innovation Partner for the upcoming ICC Champions Trophy 2017, beginning June 1, making the Champions Trophy the first ‘smart cricket tournament’. As part of its continuous drive to use the next wave of powerful technologies, ICC will collaborate with Intel to transform the cricket experience for fans, and help coaches and players improve performance.

“This is an exciting announcement for the ICC as we continue to focus on innovation and technology to enhance both the game and the experience of the fan. The innovations we’re working with Intel on for the ICC Champions Trophy 2017 are like nothing we’ve seen in the sport before and I’m delighted to welcome them to the ICC family.”

“Cricket is the world’s second most popular sport and as the official Innovation Partner of the ICC Champions Trophy, we are excited to integrate Intel technology in this tournament”

said James Carwana, general manager of the Intel Sports Group. “We will be deploying a range of technology at the event as part of the our ongoing effort to bring a new level of data analytics to sports and to revolutionize how athletes train, coaches teach, scouts evaluate talent, and fans enjoy sports.”

In the coming weeks Intel and the ICC will announce details of the specific innovations which will be deployed at the tournament.