16th JULY the next big launch date for Xiaomi!!!

16th JULY the next big launch date for Xiaomi!!!

As we reach to the mid of 2015 chinese companies have become active launching their mid range flagships in the market.

Xiaomi which started its sales in the Indian market with a boost has leaked the date of its next launch as 16th july .It is expected that the company would launch two devices at the launch, the Xiaomi Mi 5 and the Xiaomi  Mi 5 plus are the expected devices . As per the leaks this(Mi5) would be the thinnest device from Xiaomi.

The  recent spec leak of the Mi 5 suggests that the device will boost a Quad hd display(2k) with a 5.2 inch 2.5 D glass upfront. The RAM is yet to be knows but going as per the past trails from Xiaomi the device is supposed to get a 4GB RAM. The device is expected to be a one piece phone with curved metallic edges . A gorgeous piece of tech as its past devices have been. 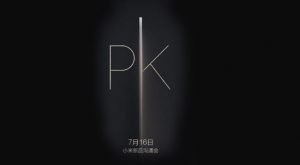 The rear camera will be a 16MP shooter while the front camera willboast a 13MP sensor. For the gamers there would be a whooping 3000mAh battery with ofcourse a fast charging support.

It is supposed to have a snapdragon 810(v2) inside, it is a 64-bit processor with a 8 core capability .It would also remove the heatig issues suffered in the devices having the snapdragon 810(v1) .however he above mentioned are leaked specs and the real scenario wll be unveiled on 16th july.

The device is expected to launch with a price bracket of Rs.25000 –Rs.30000 which would surely attract the Indian market. It is interesting to see that both the Chinese giants( Xiaomi & Oneplus ) have decided to

release their flagships in the same price bracket as the rumours suggest.

It would be a tough choice for the consumers to select among the two as both are budget friendly beasts in the mobile phones  sector.