Home Automation: Driver For The Growth Of Connected Devices In India

Smart Lighting is the most preferred segment for adoption 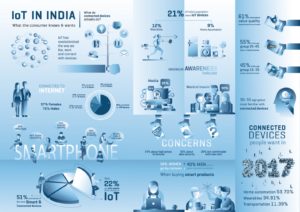 New Delhi, September 28, 2016 – Reos, a consumer hardware and software brand from Cube26, today released a survey on the ‘IoT in India – What the consumer knows & wants’. The findings reveal that India is currently at an early adoption stage and there is a need to create awareness. As per the survey, merely 22.5% of the consumers surveyed are totally familiar with the concept of Internet of Things, with maximum awareness seen in the 36–55 age group. This clearly shows there is an immense opportunity for increased adoption.

With the advancement of Internet penetration, 65% of smartphone users are connected 24*7 of which 97.2% access the Internet from home. The survey further highlights that currently merely 21% own IoT/Connected devices which include 12% Wearables and 9% Home Automation while 51% are inclined to experience Connected Devices in the future majorly in the Home Automation segment. The Home Automation segment includes Smart Lighting, Smart TV, Smart Fridge, Smart Washing Machine, Smart AC, Smart Thermostat, Smart Fan and Smart Vacuum Cleaner. Interestingly Smart Lighting tops the list across Male and Female users and the 36-55 age group, while in the 15–25 and 26–35 age groups it is ranked 2nd next to Smart TV. Wearables (including Smart Watch, Fitness Bands, Smart Headphones, Smart Clothing) are the second highest ranked category expected to witness growth in the future.

With the growth of connected devices at large, security is one of the major concerns of consumers. 60% have cited data security as a key concern for not trying Connected Devices followed by High Prices and not comfortable with new tech at 54% and 20% respectively. While making purchase decisions, 61% of consumers value quality & performance over International brand. Further, 55% in the age group of 25-45 are open to trying Indian brands if they are competitively priced and offer better specs whereas 45% in the age group of 15-25 prefer global brands. Before buying, 58% women go by reviews whereas 40% men go by peer recommendation.

Commenting on the findings, Mr. Saurav Kumar, CEO & Co-Founder, Cube26 said, “With increased Internet penetration and data usage, the Connected Devices segment is expected to witness huge growth by 2020. With the government’s continued focus on digitization and host of initiatives like Digital India, Start-Up India, Stand-Up India, Smart Cities and Skill India, we will see rapid adoption of the Connected Devices market in India.”

Key findings of the survey –

Source of information for awareness

Access Media conducted a survey of 800 people between the age group of 18-55 in India across 8 cities namely Delhi/NCR, Mumbai, Bangalore, Pune, Chennai, Hyderabad, Kolkata & Chandigarh . The survey was split evenly among age and gender. The interviews were conducted from August 12, 2016, thru August 24, 2016.

Reos is the consumer software & hardware brand of Cube26, a technology innovation startup based out of New Delhi. Under Reos, the company has launched three Android Apps namely Reos Message, Music & Camera. For its hardware segment, they have launched Reos Lite, a Bluetooth operated Smart Bulb. Reos aims to create a truly empowering mobile experience that understands, anticipates, and responds according to consumer needs. For more information please visit