The pollution level is increasing every day. The air has become so polluted that it has become unsafe for breathing. To tackle this condition Moonbow has come out with unique Air purifiers which not only purifies the air but also deodorizes it. Every company wants to make a difference and same is the case with moonbow they are the first company in India who have introduced Air Purifier with UV Light & refreshing energizer, along with other usual filters. We received the model number – AP- C6013NIA Moonbow Air Purifier for review.

Why Do You Need Air Purifier?

Before going into the review let us answer the trending question why do you need an Air purifier?. There’s no debate that the air in some of our cities is toxic. In fact, 13 of the 20 most polluted cities in the world are in India. Some of the smaller cities don’t get much attention but in reality, they are up there with the worst on the list. 2014 WHO report listed Patna, Gwalior, Raipur, Ahmedabad and Lucknow as some of the worst.

The Design of the Moonbow Air purifier is great. The Air purifier gives the feel of a product from a future. The color combinations used and the Air vent that takes in the air and the Air out place are well thought and placed. The Moonbow air purifier which we received had a LED lighting on the top right and left corners which look really pleasing. The Led lighting doesn’t irritate you and it’s bright enough for you to notice it and the color of the led changes automatically. The Moonbow Air purifier which we received didn’t have any Air quality Indicator present on it. The Air purifier is pretty compact in size and Lightweight too which makes it easy to carry around. The Air filters are very easy to replace as you don’t have to remove any screws or do some tedious procedures. Just open the panel with a slight push and you are ready to replace the air filters. 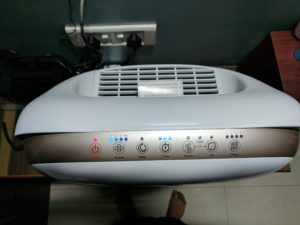 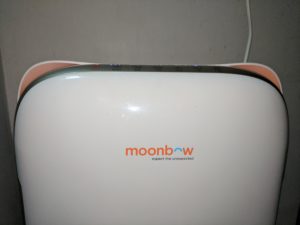 Moonbow Air purifier works pretty well. The purifier comes with 5 stage purification process which involves UV filtration which no Air purifier is offering right now and UV filtration is unique to Moonbow Air purifier. Moonbow Air Purifier’s Puri 5 technology is a 5-stage filtration process that cleans the air and kills almost every pollutant present in the surrounding area. This process involves drawing air from a given space, such as a living room, into the unit and then making it pass through five filtering devices within the unit. After which, the air is recycled and released back into the room as clean or purified air. The Air purifier comes with Touch capacitive buttons on the top of the air purifiers. The fan speed of the purifier can be controlled via Top panel and can even be set to auto mode also. Moonbow air purifier is capable of removing not just smallest pollutants (down to 0.3 microns), but they also clean various germs present in the air. Its 5-stage purification system eliminates all types and degrees of pollutants. Hence, this purifier not only just filters pollutants but it, also, removes all kinds of odors and pushes refreshing air into your room in no time. The Air purifier is not that loud it performs its job well-being silent enough not to disturb your sleep.

Moonbow has come up with a unique air purification system which is very new to the market. Air purifiers have become the need of the hour as every day the pollution level are increasing, on the other hand, the Air quality is decreasing and becoming unsafe for breathing. Moonbow Air purifier is budget friendly and even user-friendly to operate. The filters can be replaced easily.