Asus ROG G20CB is a compact gaming desktop PC which This machine is aiming high: it’s small, stylish and costs around Rs.1,75,000. That puts it in competition with some of the more luxurious small PCs I’ve seen recently.

Asus G20CB is a small form-factor gaming PC adorned with the Republic of Gamers(ROG) brand – a name and logo usually found on laptops and motherboards.

Asus G20Cb has got strong points on design. The chassis of G20 looks stunning and it definitely impresses you, the time you see the desktop the first time. It has got LEDs on its front and base that can be customized in software, and the front and top panels are decorated with a striking, angular pattern – a design Asus says is inspired by Mayan tribes. The angled styling of the matt black chassis and the science-fiction, backlit labyrinth touches around the edges looks superb. The red core that runs through the middle of the whole machine is a notable highlight, although the strong color does limit the potential of the pre-installed Asus Aegis software which, among other things, lets you customize the backlit LEDs to glow in different colors. Not a lot goes with metallic red, so I found myself sticking to the preset red LEDs. The G20CB is thicker at its base and tapers to a narrower top section with a cut-away design. It also means that the side panels are angled, which prevents this machine from laying on its side. 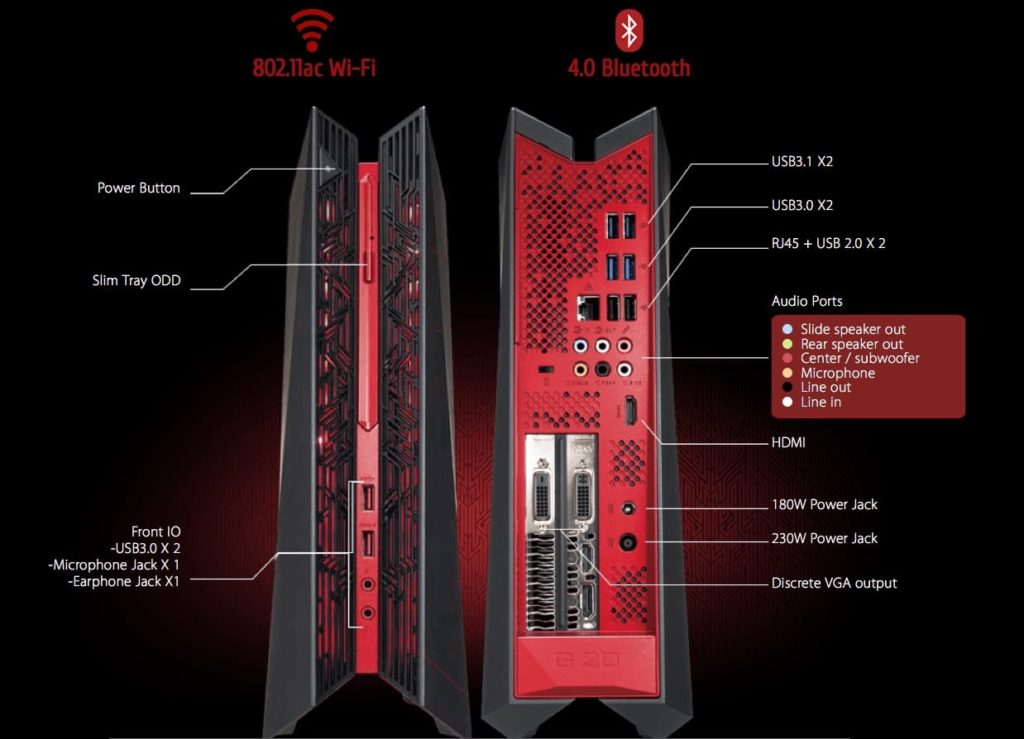 With a horizontal footprint of just 358x340mm or a 108×340 footprint when placed on its side, the G20CB will fit just about anywhere, be it on your desk or on your TV. It’s immensely practical, which is something worth paying for if space-saving is your prime motivator. There is one caveat to this: the external power supply is, in fact, two large power bricks housed inside a plastic frame, making them much bulkier than a traditional PSU.

On the front of the chassis, you’re afforded two red-accented USB3 ports and two 3.5mm audio jacks. There’s also a pop-out DVD drive here, although considering how much the G20GB costs this is a bit disappointing, as it would have been nice to get a Blu-ray drive for Full HD playback. 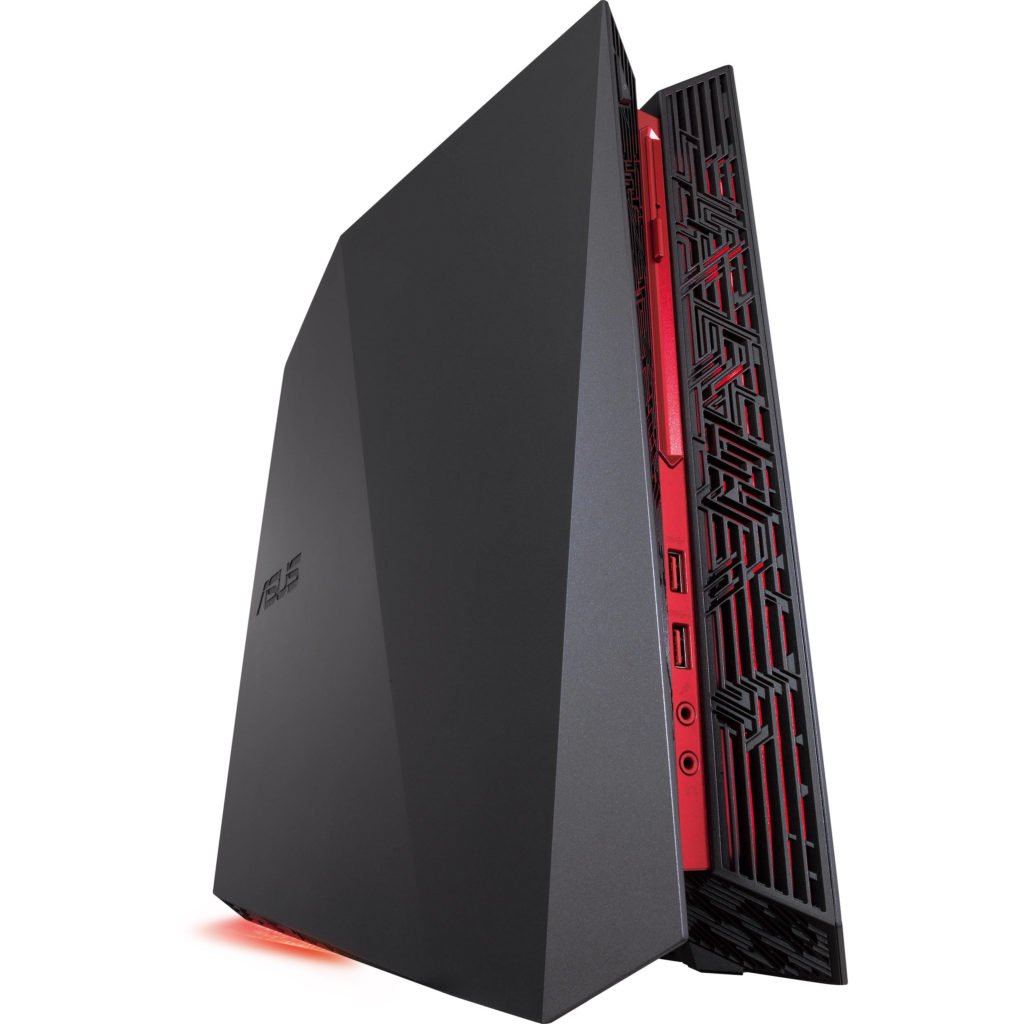 On the front of the chassis, you’re afforded two red-accented USB3 ports and two 3.5mm audio jacks. There’s also a pop-out DVD drive here, although considering how much the G20GB costs this is a bit disappointing, as it would have been nice to get a Blu-ray drive for Full HD playback.

At the rear, there are six USB ports, which are made up of two USB3.1, two USB3, and two USB2 ports denoted by light blue, dark blue and black connectors respectively. There’s also a Gigabit Ethernet port and six 3.5mm audio jacks. There’s no optical S/PDIF for use with some soundbars and older AV receivers, but the graphics card (more on this later) has three DisplayPort connectors, an HDMI port (through which you can output audio of course) and a DVI port. In short, the physical design of the Asus RoG G20CB isn’t just a resounding success, it’s the best part of this Gaming Beast PC.

For such compact beast, performance is something that many of users could have doubt on but for such a compact gaming PC specification are potent. There are several models available, but the model on test here is the most expensive you can buy in the India today. It comes with the Intel Core i7-6700 processor that runs at a base clock speed of 3.4GHz, boosting to 4GHz when thermal conditions allow for it. It’s also paired with 32GB of DDR4 RAM. The graphics card provided with it is super powerful Nvidia GTX1080 with 8GB of GDDR5X RAM. Windows just boots in just 20 seconds!.

i7 is best not only for gaming but if you are graphics editor then this PC is a Game for you. Graphics/Video editors can take the advantage of its high Turbo Boost speed and multi-tasking-friendly Hyper-Threading technology. Core i7 chip can hit 4GHz, it could not reach and sustain that speed as the air flow did not help reduce the temperature inside the chassis. The G20CB can drive three FullHD displays to have a multi-monitor panoramic gaming session, without showing lag. The G20CB includes a normal 32GB of memory, and the storage follows the conventional pattern of an SSD with a hard disk. The former is a 256GB Samsung internal SSD, and the latter is a 3TB unit. upgradability, meanwhile, is very limited: this custom chassis is extremely difficult to work on and any upgrades will come at the expense of a pre-existing component.

The PC isn’t obnoxiously loud under load, but you’ll definitely know it’s there when you’re playing games. It gets pretty hot, too. If you’re going to place it under your TV, leave plenty of room behind and around it to allow the hot air to dissipate.

Asus ROG G20CB is well thought Gaming Desktop designed to provide gamers the best of hardware they can do. Asus has provided all top of the line specifications in the desktop. If we keep the price aside the computer has really wide range of connectivity ports, 32GB Ram, 3TB HDD, 256GB Samsung SSD, and not to forget the Nvidia GTX 1080 Graphics on the deck. The ROG G20CB is capable of VR Gaming. The concern arises is that the pricing of Rs.1,85,000 with an almost limited scope of upgrading. One can simply go for a custom build in the same budget and still be left with some amount to buy additional upgrades. In Gaming, its all about who’s got a sexy build and if you are looking for one then Asus ROG G20CB is sure to impress you. The Chassis of G20CB is one thing which you won’t find in custom build PC also it’s a quite difficult to fit the i7 and GTX1080 in such compact case as the two generate lot of heat and it would be difficult for anyone to have stable Gaming season until you are expert in building PC and managing the cooling system.