Asus ROG Strix II Review: A Laptop Worth Every Rupee Spend on it

Asus ROG is a special division from Asus that specifically focuses on the Gaming peripherals. The ROG is completely unique and Different series than what Asus offers in its other series. From the Name itself, it’s easy to understand that Republic of Gamers laptop are specially designed laptops and accessories keeping the Gamers in Mind. There are a lot of Gaming laptops available in India right now from HP’ omen, Acer’s Predator Series and Dell’s Alienware. All of the mentioned laptops have been the to go laptops by the Gamers and not to forget that Asus is not behind in the race to win the best Gaming laptop and hence Asus launched the ROG Strix 2 in India recently and the laptop was sent to me in Mumbai for testing at my own comfort. With already lot of choices available in India right now, let me make the task for more tough for you by giving a detailed and honest review of the Asus ROG Strix II Hero Edition Laptop. 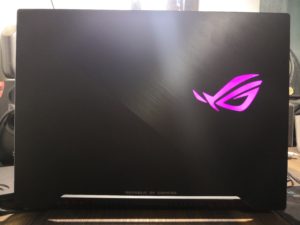 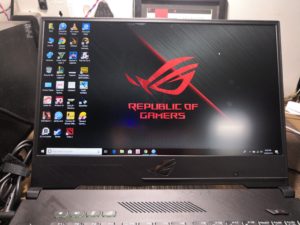 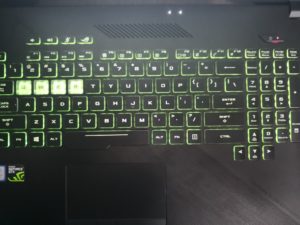 The first and foremost thing after the specification sheet the Gamer looks for the design aesthetics of the laptop that’s going to be with him in all war and fights. Asus ROG Strix II comes with a 15.6″ Display 144mhz refresh rate. The ROG Strix Hero II’s black, aluminum lid is stylishly designed, with a slash representing the battle line in MOBA (multiplayer online battle arena) games. The upper-right section is elegantly hairline-brushed, creating a satisfying sensation to the touch, looks new and sturdy. The ROG logo on the on the lid is powered by the multicolored led backlight and you can configure the color of the logo to your liking. The 4K Led Display on the laptop is really crisp and show to true to natural colors and have proper color saturation. The Keyboard offered on this gaming laptop is a full sized keyboard with the number on the left. The Keyboard is also powered by the multicolored Led which can be configured through Asus’s aura software which can be accessed from the ROG Center. There are dedicated keys for Sound, Microphone and ROG Center so that you can access them quickly. The keyboard is really eye-catchy and color changing led’s really catche’s anyone’s eye from distance because of its beauty.  just above the keyboard, there’s an air vent which is used during excessive heat dissipation from the laptop. The laptop also features a stunning led bar the bottom front of the laptop which is again configurable via Aura software on the keyboard. The laptop comes with 4 USB 3.0 Ports, 1 HDMI and USB Type C port along with the ethernet adaptor and card reader. The screen of the laptop is almost bezeless with 97% Screen to body ratio. This screen to body ration means you get immersed in the game fully and actually feel it in 3D. Not to forget the Amazing 3D surround speakers that the laptop comes loaded with, even without a headphone, you would be able to easily understand the movements happening in left and right or even at your back. To be honest I never expected the default speakers to be that good. Last but not the least there’s a camera located towards the bottom of the screen. In comparison with other competitors in the market – At 5.1 pounds and 14.2 x 10.3 x 1 inch, the ROG Strix Hero II is the thinnest and lightest mainstream gaming laptop among its competitors. The Acer Predator Helios 300 (15-inch) is the thickest, measuring 1.5 inches; the Lenovo Legion Y720 is the heaviest, weighing 6.8 pounds. Overall, this is a gaming rig you’ll definitely want to own. 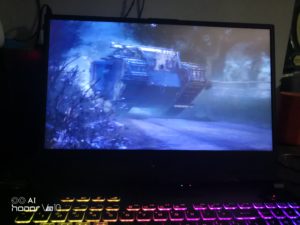 This ultimate gaming rig comes with 15.6″ IPS display which is very crisp and vibrant and shows color in their true nature. It has a resolution of 1920 x 1080 and comes with the 144-Hz panel which is wonderfully bright and vivid, capturing each detail as it was meant to be represented. I played games like Call of Duty World War II, Grand theft Auto and Far Cry 5  and trust me I was blown away by the color reproduction on this amazing display. I was able to figure out every detail like the grass and hairs. Thanks to amazing processing unit present on the machine I was able to figure out every movement while in game. 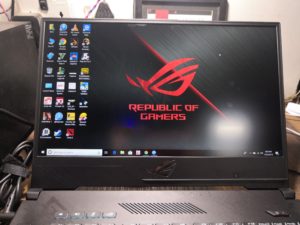 Much is said and talked about the beauty and the display of the ROG Strix II and let’s get to the brains of it. This laptop is no doubt is designed and build for gaming purpose and hence has such heavy specifications. These specifications in real-world usage actually justify the laptop’s price. While I was using this laptop, I tried to play heavier games on graphics and to my surprise I was able to play all of the games without any glitch. There were no signs of lag or any delay due to graphical processing. I love the fact that this machine can run any game and even play 4K video without any hiccups. There’s one problem, the machine sometimes gets really hot even with just chrome usage and if you are playing games and you keep the laptop fan on overboost mode than you are sure to hear the machine roar. The sounds of the fan are too much and it may be possible that you may like it or not. In my case I actually like that machine roared and reminded that it’s working well to run the application I am using. This baby roars with power. The Hero II can run Shadow of War like a champ, stream your favorite Spotify playlist and manage over 40 Google Chrome tabs filled with more wikis than you need all at the same time. The laptop gets that fiery horsepower from its Intel Core i7-8750H processor, 32GB of RAM, 256GB NVMe SSD, and 1TB, 5,400-rpm HDD.

On the Geekbench 4 overall performance test, the ROG Strix Hero II scored an amazing 20,690, skyrocketing over the 15,676 mainstream gaming laptop average. It took the Hero II 11 seconds to copy 4.97GB of multimedia files, translating to a whopping 462 megabytes per second. That’s higher than the 323MBps category average as well as the PowerSpec’s 391MBps. The Predator and the Legion were a little slower, at 188 and 164MBps.

On the User Benchmark, the laptop faired really well and had the top rating in every aspect. Here’s what the benchmark said about this laptop. You can read the detailed benchmark here

In the 3D mark Time Spy test the laptop had the result of having being top results over the 40% of laptops with a score of 3978 having the same set of configuration. You can validate the results here

Asus has already ticked all the check marks in terms of display, performance, specification and now it comes to the most important thing that’s battery life. This Gaming beast gave me a battery on the performance mode for 3hours and 24min that’s close to 03.30 hours of gaming without a power supply but at my own place without any disturbance :P. While I was testing the battery life if the laptop the brightness was on the fullest side and I was continuously browsing over the WiFi and streaming youtube videos. In my opinion, the battery life is just average considering that the competitors being able to pass the 6 hours mark.

Yes, the laptop does generate a lot of heat and the overboost mode present on the laptop comes handy in firefighting, Yes, the overboost mode tries to increase the RPM of the fans and they’re getting the hot air outside and also dust particle along with it. The heat very rarely gets to keyboard and palm area but when it does it’s not that much. You can continue to use the laptop without any issues.

ROG Strix II climbed above threshold even when it wasn’t gaming. After I streamed a 15-minute HD video, the underside climbed to 103 degrees. The center of the keyboard hit a more reasonable 92 degrees, and the touchpad registered a cool 79 degrees.

The most important part about the laptop is the price for which it is retailing. Asus has priced this beast Rs.1,49,990 for the 6GB GPU and for the 8GB GPU variant the laptops costs a whopping Rs.1,89,990. The laptop is available at all the Asus partners and online major Amazon. The pricing of the laptop is somewhat on the higher side when compared with the global prices of the same laptop. If Asus manages to bring the same price in India then this beast would be selling like hot cakes.

Asus ROG Strix II Review: A Laptop Worth Every Rupee Spend on it 149990

Asus ROG Strix II laptop is no doubt a laptop that has great specifications, brighter display and packs the firepower which you need to play the games without any hiccups. The laptop manages to run no matter what task you throw at it. The speakers of this machine are well placed and are loud enough to differentiate the left and right along with the surround effect. The only thing which might take away you fun might be the preloaded Asus bloatware and awkwardly placed Webcam.

Overall as I have mentioned in the review, Asus has managed to tick all the right checkboxes this time with the updated version of the Hero 2. It packs solid battery life, awesome and eye catchy keyboard and aura lighting all over and the great performance which makes it the one of best laptop for gaming on the go except for the price which it retails in India.